The $197M Cost of Not Paying the Prevailing Wage

What construction, waste management, and manufacturing companies need to know about the Davis-Bacon Act

Non-compliance with government regulations, such as the Davis-Bacon Act, can be costly. As 6,977 businesses discovered, the dollar amount of back wages owed to employees can quickly jump from thousands to millions. Explore the map below to see violations and back wages paid by industry and business type in cities across the US.

Since 1985, the United State Department of Labor’s (DOL) Wage and Hour Division has reported over 119,000 violations of the Davis-Bacon Act. Those violators, who failed to pay employees the prevailing wage for government-contracted projects, paid over $197 million in back wages to their employees. Of all the industries in violation of the Davis-Bacon Act, construction was the worst hit by far, followed by administrative and support and waste management and remediation services, and manufacturing.

By their very nature, these industries are more prone to Davis-Bacon violations, says
Long Island construction attorney and New York architectural lawyer John Caravella. “The Davis-Bacon Act is really only concerned with the payment of prevailing wages on federal contracts for the construction, alteration, or repair of government projects,” John said in a recent interview with TSheets. “So we can expect that it would primarily affect these types of businesses because they are the ones providing services and materials on federal construction contracts.”

Why commercial and institutional building construction companies, electrical contractors and other wiring installation contractors, and plumbing, heating, and air-conditioning contractors are most affected by Davis-Bacon violations is more a matter of their relevance to government construction, alteration, and repair projects. John speculates the high number of violations are a result of the high exposure these companies have to government projects.

The Davis-Bacon Act violations are the result of a subcontractor — who is not especially familiar with federal prevailing wage laws, may not even have been provided with the original bid specifications, and without meaning to — failing to pay the prevailing wage.
– John Caravella Construction Attorney

That extra exposure means those violations are easier to see. But that doesn’t mean every violation is committed maliciously. “I’ve noticed that in many situations, the Davis-Bacon Act violations are the result of a subcontractor — who is not especially familiar with federal prevailing wage laws, may not even have been provided with the original bid specifications, and without meaning to — failing to pay the prevailing wage,” John says.

Such was the case of United States ex rel. Wall v Circle C Construction, LLC, which went all the way to the United States Sixth Circuit Court of Appeals, when a Circle C contractor didn’t properly check his subcontractor’s payroll before certifying it. Over the course of the seven-year project, the contractor paid some electricians about $9,900 short of the prevailing wage specified in the government contract. As a result, the Circle C contractor was found guilty under the False Claims Act (31 USC 3729) and ordered to pay the government over $750,000 in damages. 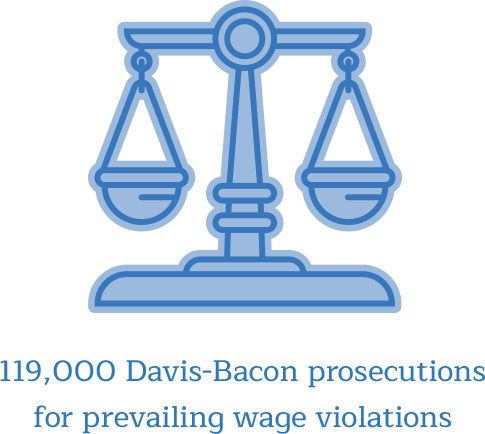 What Does “Prevailing Wage” Mean?

To start, the purpose of prevailing wage is to ensure all workers are compensated fairly for government-contracted projects. For example: If you own a construction company in one county and you’re contracted by the government to repair a road or build a bridge in a neighboring county, you’re obligated to pay your on-site workers the going rate of pay in that neighboring county.

By definition, prevailing wage is the average or majority hourly rate of pay, benefits, and overtime paid to the majority workers, laborers, and mechanics (including apprentices and trainees) in the largest city of a given county. Prevailing wage is further determined by trade and occupation. But don’t get caught up in terms like “laborers” and “mechanics,” as those job classifications also include:

Meanwhile, employees NOT covered under the Davis-Bacon Act include:

How and When Is Prevailing Wage Determined?

The Davis-Bacon Act is a federal law that requires a prevailing wage (or certain wages, benefits, and overtime) be paid weekly to all employees working on government-contracted projects worth $2,000 or higher. Enacted by Congress in 1931, the Davis-Bacon Act grants fair pay to on-site employees and gives local contractors the opportunity to compete for public works projects. 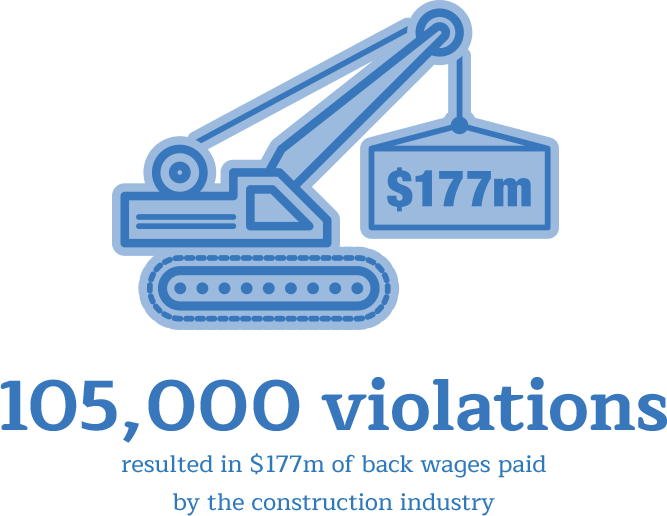 But it’s not just thousands and millions of dollars in back wages at stake for companies that violate the Davis-Bacon Act. Any contractors or subcontractors who willfully fail to pay the prevailing wage also risk termination from government contracts and exclusion from future contracts for up to three years, among other consequences.

The best way for companies to ensure Davis-Bacon Act compliance is through certified payroll.

The contractor or administrator responsible for the completion of the project is ultimately responsible for Davis-Bacon Act compliance and all the paperwork that comes with it, such as certified payroll reports. If wages are left unpaid or misreported in certified payroll reports, the task of correcting the reports and paying back wages owed to workers — even if workers are employed by a subcontractor — falls to the contractor or administrator in charge.

And while there are those who
oppose the Davis-Bacon Act, John believes it’s still a necessity, especially when
minimum wage doesn’t meet workforce demands.

“The Davis-Bacon Act has been criticized as being unnecessary. But the other wage laws, for the most part, don’t have any effect on federal contracts,” John says. “That leaves you with the federal minimum wage, which is currently $7.25 per hour. While I believe that the Davis-Bacon Act could be improved, I don’t know that I want minimum wage workers building our federal highways and courthouses, and I don’t think we can entirely trust to the market to keep wages high. So, with perhaps some amendments, I do think that the Davis-Bacon Act is still relevant.”

“Word is spreading that construction industries are under close regulatory scrutiny,” John says. “And as they realize that they have to pay attention to this side of their businesses, construction firms will start taking proactive steps to become compliant, and the number of prosecutions will accordingly drop off. Until contractors catch up to these compliance issues and violations drop off, I suspect that we will continue to see new regulations on this issue, at least at the state level.”

But certified payroll also presents its own challenges.

So, What Is Certified Payroll?

Certified payroll is a comprehensive federal report (form WH-347), submitted weekly to the agency in charge of a government contract that lists every employee, what they should be paid, the benefits they’re entitled to, the type of work they did, and hours they worked that week. It also shows withholdings (taxes, child support, etc.) and gross wages. Each certified payroll report also includes a statement of compliance.