The Best and Worst States to Be a Tipped Worker

An up-close look at Americans in the service industry

Hover over the map to see average tip rates by state

The life of a tipped worker is great for segments of the workforce that value flexibility and the potential to earn extra cash on an expensive bill — not to mention learning about food and chatting with interesting people.

And the US is unique in its approach to tipping. We tend to tip more, and for more services, than anywhere in the world. But the quality of life for tipped workers varies from state to state, and it depends on the work performed and the laws and value of service customers place on their drinking and dining experiences.

TSheets set out to find the best — and worst — states in America to be a tipped worker. We surveyed 208 anonymous respondents from each state, asking them about their tipping habits.

The best and worst states for tipped workers

TSheets ranked all 50 states from best to worst based on two factors: 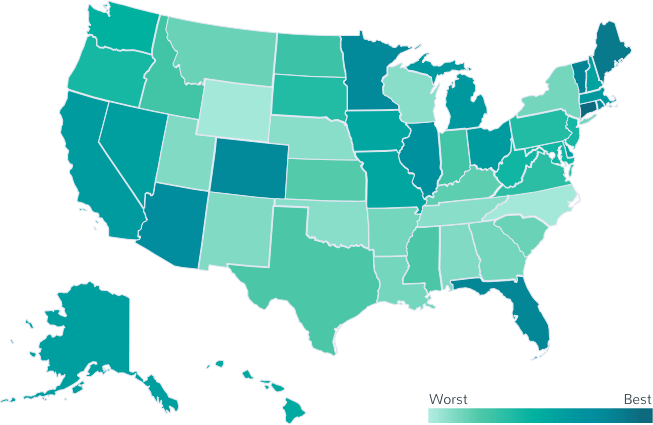 Ellen is a writer and California native who works as a server to pay rent. She started out as an emergency bartender for a local art gallery in Oakland, and after falling in love with pouring drinks for party people, she took her newfound confidence to a high-end bar in San Francisco. But tiring of the city life, she took her skills to a place more inspiring.

“I work a rotating shift on the beautiful California coast now, and I get to bed at a reasonable hour,” said Ellen.

Our research found Californian patrons tip an average of 16.66 percent of their bill, and they ranked 13 on our list of best places to be a tipped worker. California requires employers to provide full state minimum wage, before tips, to every employee. Since most people base their tip on the total check and the quality of service, Ellen said it’s a game of efficiency, grace, and upselling.

“Being perfectly charming, upbeat, and timely in your service cycle is what gets you to that 20-percent average,” she explained.

It’s not incredibly common for patrons to leave big tips, but when it does happen, it makes a huge difference to workers like Ellen — a Facebook executive once handed her $200 after she “dazzled his employees” with her bartending skills. Despite this and despite the fact that Ellen is great at her job, every now and then she will work hard and find no tip at the table. That’s the risky reality of being a server.

In New York City, Matt commutes into Manhattan for work, where he’s the general manager for a large hospitality group. He’s been with the company for almost two and a half years and now makes a salary, and the industry has served him well.

Despite Fair Workweek laws passed in New York to improve scheduling for fast food employees, New Yorkers in service are still on the lower end of the list when it comes to tips and minimum wage. Residents tip an average of 17.14 percent on their bills, according to our data, and the state ranks 41st on our list of the best places to be a tipped worker. Although he’s not currently working for tips, Matt sees his customers as generous overall.

“I always received good tips when I was a server and bartender,” he said. “Even now, as a manager of a venue that has no tip jar, guests consistently try and tip me. When I worked the floor for tips in Boston and New York, I always received around 20 percent.”

New York, among other states, allows employers of tipped workers to practice “tip pooling,” where tips are pooled and divided between staff at the end of a shift. Employers in New York are required to pay minimum wage, but they are also allowed to take a tip credit, which is dependent on the size of the employer and what specific job duties the employee performs.

Our research found the national average for tips to be 17.12%

Meanwhile, in Boise, Idaho, Kim gets ready for a closing shift at the bar and restaurant where she works as a bartender. Kim has been working in the service industry for 17 years. As a single mother and a biology student, she appreciates the flexibility of her bartending schedule and the chance to connect with people at work.

Idaho is one of the fastest growing states in the country. It ranks number 32 on our list of best places to be a tipped worker, where patrons tip an average of 16.51 percent.

Kim said Idaho tippers tend to leave between 18 and 30 percent of their bill, and that when bartending she’ll make a dollar (sometimes two) for every drink she pours.

Of course, you can’t predict what people will tip after a few rounds.

“There are always those random nights when someone is feeling generous, like the other night when I got tipped $20 a drink by some very happy trivia-goers,” Kim said.

Kim makes $12 per hour, which she said is definitely not the norm for the same type of work in her area. “It is rare to be acknowledged and appreciated by a boss in this industry,” she said. “I feel very fortunate to have the job I do now. My bosses understand that my son and school come first and are very accommodating.”

As with any research findings, it’s important to take into consideration the context in which we view the results. In the midst of the #MeToo movement, many women spoke out about their experiences of harassment in the service industry, and why relying on tips created an imbalanced power dynamic between server and patron.

The New York Times ran a story that compiled the effects of sexual harassment on tipped workers and explored whether employees felt they had to put up with embarrassing encounters and mistreatment in the name of tips.

Ellen said she’s experienced harassment in serving. And even though she always speaks up about sexism in any context, the number of server jobs available in California makes it easy to leave a job if it’s unsafe.

“Like every woman in the industry, I’ve experienced it,” said Ellen. “But I’m very lucky to work at a place that has very woman-driven leadership and cares a lot about making the workplace safe for everyone. That is far too rare to find in this industry and I looked for a long time before finding it.”

How tipped workers make it work

For work that is so reliant on your ability to live in the moment and roll with the punches, tipped employees are often tasked with learning from their interaction with the previous customer and bringing everything to the table for the next. And no matter how hard you work, nobody is perfect, and there will always be factors that make or break your tip.

“Great service to me is situational,” said Matt. “Whether you’re a cashier staring down a huge line for a chain restaurant or a server working fine dining in an intimate setting, the goal is always to observe and react to the situation presented so that you can provide the service required for each guest.”

Ellen and Kim would agree.

“As a waiter,” remarked Ellen, “your career is defined only by the satisfaction of the last table you served.”

Who are the best tippers? Aside from Facebook execs, our friends in the service industry seem to believe in other tipped workers when it comes to leaving a generous gratuity.

“The best tippers in the industry are those in the same industry,” said Kim. “They are working-class. They are paycheck-to-paycheck. They are sympathetic.”

And what about those who can’t afford to tip well? It depends on who you ask.

“To me, dining out in America is a privilege,” said Ellen. “We have the best service of any country on Earth. You should only do it if you can afford to reward great service. That’s why when I was broke, I didn’t go out to eat!”

*We surveyed 208 anonymous respondents from each US state, asking them about their tipping habits. Respondents could choose between 0 and 30 percent on a 5 percent incremental scale (0, 5, 10, 20, or 30 percent). In addition to cross-tabulating the average tip rate per state with the relevant national and state minimum wage data from the Department of Labor (DOL), we considered recent changes to tip pooling regulations for more accurate results.